NOTE: The gifs used in this article do not animate correctly upon first loading, click on them and then go back to have them work

Parker has a parry on his AB special. When it parries something the opponent is programmed to lose their invulnerability no matter what. If a projectile is parried as the opponent is on the ground, they become vulnerable to attacks when they normally cannot be hit. Although the game doesn't count it as a combo the opponent cannot block. Parker is the only one who can activeate the glitch, but he can do so against himself, June, Tenchi, and most frequently Keiko due to her being able to attack with her cat when while being hit or thrown.

Hitting the opponent as they are bouncing on the ground will result in an air hit, however, once they are getting up in the animation they are both grounded and throwable.

If two attacks hit an opponent in the same frame, Pocket Rumble will make their hitstops play one after another, while still being on the same gameplay frame.

This was to prevent an overhead attack and low attack hitting on the same frame from being completely unblockable, like many other games.

Things like damage and animation are changed between each hitstop, but many other things are not updated. This means that if a normal move that lauches and a projectile that doesn't hit on the same frame, even though the launching move hits first, the non-launching move overides it and the opponent is left standing.

This glitch is mainly used for combos not normally possible. The main benifactor is June with her down forward A madusa head, hence the name. Typically, it is impossible to combo her standing B into her down back A launcher for 2 reasons: 1. It launches 2. there isn't enough hitstun to combo even if it didn't launch. By using Junebug, she can cancel into down back A off of stand B but the stand B's launch is overidden with down forward A's non-launching and greater hitstun, allowing the combo to work:

the glitch is mainly setup when the opponent is getting up from a knockdown, but can be done with perfect timing.

Besides June and her down forward A + stand B, Parker and his down back B + crouch B is another combo that allows him to convert a long ranged low into a full combo.

Another effect of Junebug and projectiles in general is that they stop all pushback the attacking character has when hitting in the corner, which can allow more than 2 jabs to chain and other 'impossible combos'

Reverse Junebug is very similar to normal Junebug in its application and cause, but allows the disruption of the normal priority of which attacks' hitstops resolve first.

This is done by abusing that fact that the size of the opponent's hurtbox during the hitstop of a launching move is taller than a crouching hitbox.

To set it up, have a launching move hit a crouching opponent while a non-launching move is right where the opponent's hurtbox 'would' be if they were standing. The latter attack is usually a jumping normal:

This version of the bug is much harder to pull off, but its main use is in Keiko's max damage combo. June and Parker can utilize it, but to not as great an effect.

This is a June specific glitch that allows a clone to be created right after using another clone. This is done by first setting up a clone with her down forward B normally. Then if June activates the clone and immedietly uses down forard A or down forard B, a clone of whatever move she used will remain, but all her meter will be gone. This clone will remain in the same spot even if June uses other specials. If june gains full meter back with the glitched clone still there it will start acting normal again. Using the clone will cause June's meter icon to bug, making it unable to show correct meter values until it is full.

The clone can be activated like normal, and will not use up any meter as long as June's meter is not full.

This bug can be performed any time, but hitstop messes with it. Canceling into clone activation immediately doesn't perform the glitch, but canceling into it late does. Projectiles hitting during the setup also make it not work. When performing this in training mode, turning on slow motion will prevent the glitch to activate

Keiko's cat, Q does not behave like all other attacks in the game when it comes to hitstop. Players and projectiles freeze, but Q doesn't. Players are also invulnerable during hitstop, meaning that it is possible for one of Q's attacks to whiff right over an opponent if the final few active frames that would have hit occur during hitstop.

If a character trades blows with Quinn's Wolf form, they will teleport to the other side of Quinn during the detransformation stage keeping the same distance on the other side if possible

By hitting the 'swap character' button while parker is throwing someone, unlike all other normal throws, the characters will swap.

If the swapped character is the parker doing the throwing, then the character getting thrown will be stuck in the "getting thrown while being shocked" state and will be a hunched over floating invulnerable skeleton.

If the character getting thrown is swapped, the game crashes

During Subject 11's down back B throw, Subject 11 is swapped out, the opponent will become non-solid but vulnerable, being able to move and attack, but able to walk through opponents until they are hit, block something or are thrown.

After doing the previously mentioned throw swap glitch with Parker, by swapping him out as he is throwing someone, they become frozen in a "getting thrown while being shocked" state. By interrupting this state, the opponent's animation timer is never properly reset and they animate twice as fast normal. This leads to almost every move being able to be used in combos, and other wacky effects like jump attacks happening multiple times a jump.

On the PC version, the cheatcode 'c h i p' can be typed, which will cause the round to end, which frees the stuck player without properly restoring them, whichb activates the glitch.

On the switch version (there way be a way to use cheatcodes by connecting a keyboard?) the previously mentioned 'OTG glitch' must be used to get rid of the invulnerability that the stuck character has. Due to this only Keiko and June can be freed, by using the Cat's specials and Clone projectiles respectively for Parker to parry> However for some reason, June only doesn't become restored correctly if she is knocked down out of the state, not hit by non-launching move while Keiko will become turbo either way.

If Parker hits a character in the previously mentioned turbo state they will slide away as normal for a bit, then slide back with increasing speed, untill parker is teleported to the other side of the stage. Parker will then be teleported back if he gets too close, although 'too close' gets closer to the affected character over time. They alos will never leave hitstun and can be hit again to start it over. Knocking them down or hitting them with someone other than Parker fixes it, and throwing them reverts them to normal.

If Keiko's cat is killed in training mode with 'meter refill' turned off and then 'meter refill' is turned on, the old cat's body will remain on the ground and a new cat will spawn. 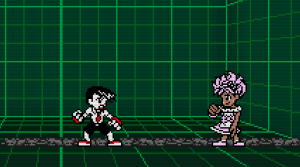 This can be repeated.

Swapping characters before player 1's health can restore in training mode will prevent it from restoring until the next restore. This can allow combos and attacks to KO in training mode

If a character is KOed during training mode and is hit after the initial KO, usually by a multihit move, then the game will softlock with both characters standing for eternity if done in the corner.

On the switch verion of pocket rumble, mashing the directions on the character select screen hard enough causes the sound to break, and the character select theme will not stop playing, cannot be lowered with the in-game sound menu, and no other sounds play until the game is reset.

There are many instances of the UI bugging such as round count's not appearing, health being on the wrong frame and more. These do not affect gameplay and have a variety fo causes that may be fleshed out later.